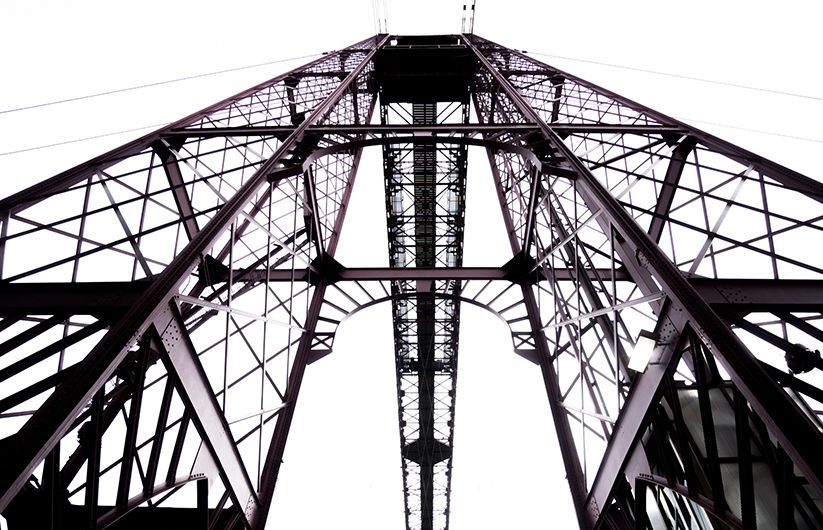 Modern industry would be unimaginable without steel, one of mankind’s great technological advances. Its history is strongly linked to our area, the Basque Country, where the Romans once extracted iron, and which was an internationally important hub during the golden age of the steel industry, between the end of the 19th century and the first decades of the 20th century. One of the best examples of this splendor is the Vizcaya Bridge; the world’s oldest transporter bridge and a marvellous feat of engineering for the time, a UNESCO World Heritage Site.

The result of the alloy of carbon and iron in very different proportions (carbon is not usually more than 2%), steel is a particularly valuable metal for its strength and malleability, highly sought after in many industries beyond the steel industry itself: metallurgy, manufacturing, automotive, metalworking … However, it has a relatively short history, although it has been crucial in the technological development that began in the last century and continues to the present day.

The ancient Greeks were familiar with the somewhat complex technique of hardening iron weapons by heat treatment around 1000 BC, and the first direct references to steel began: Herodotus refers to Glaucus of Chios as the first man to invent the art of inlaying steel. But the first piece of steel would arrive much later in India, where low-carbon alloy cast iron was first used. A wrought iron pillar from 400 AD can be found in Delhi, and is still in perfect condition today. Steel production techniques were refined in various parts of the world: all civilizations were aware of the enormous potential of this material, because of its ease of forging, its malleability and its great durability.

The use of steel in the Middle Ages

The forgers, one of the fundamental artisan’s guilds in medieval industry, were valued for producing weapons with more and more refined steel. At this time, the swords of Damascus, those of Toledo, and much further afield, those of Japan, achieved worldwide fame. However, there was a problem for this industry: its manufacturing processes were long and expensive, which limited the progress of production and the development of new varieties of steel.

Into this background, blast furnaces were born in 15th century Europe, originating from the ‘stückofen‘ furnaces in Harz, Germany, large facilities that for the first time allowed the liquefaction of iron and achieved the large-scale production of base steels. This type of furnace became very common in Europe between 1400 and 1500, and was the kernel of the steel industry developed centuries later. In these furnaces, steels were perfected, the most important being in the 17th century Blister steel from Sweden, malleable wrought iron from the Catalan forge and steel from the aforementioned Harz region.

The arrival of the Industrial Revolution

During the 18th century, steel production accelerated and technology was improved with the arrival of the Industrial Revolution in the middle of the century. This technological, cultural and social revolution was made possible by iron and steel. The production of cheaper, more abundant and much faster steel (thanks to the Thomas-Bessemer converter, invented by Henry Bessemer in England in 1856: a system for converting iron to steel without using fuel) made it possible to obtain the energy necessary to create, extend and maintain systems such as the steam engine, land and sea transport, the textile industry, or the subsequent inventions of electric and internal combustion engines. Thus, our current world and culture are a direct result, ultimately, of the development of the steel industry.

The path to the present day

In 1902, the most important qualitative leap forward of recent times was made with the introduction of electricity into the foundry process. Since 1950, most industries have been using the continuous casting system, with traditional moulds and rolling mills. At present, the sustainable development of steel as a material, industry and resource is the major objective to be achieved.  Steel is a totally and indefinitely recyclable material, a great starting point for our sector. The increasingly efficient use of energy and the reduction of waste, without overlooking quality and durability, are the basic premises of today’s steel industry in order to achieve environmental sustainability and safeguard the future of our planet.

Forging is one of the oldest trades in the world. There is plenty of evidence of jewelry and tools m…

ULMA Forja, S. Coop / Ulma Forge has been awarded a contract to supply flanges to the Berr…

Since ULMA’s birth, forged steel has been our reason for being. Everything we have achieve…

This website uses cookies to improve your experience while browsing the website. Outside of these cookies, the cookies that are classified as necessary are stored in your browser, as they are essential for the functioning of the basic functionalities of the website. We also use third-party cookies that help us analyze and understand how you use this website. These cookies will be stored in your browser only with your consent. You also have the option to opt out of receiving these cookies. But opting out of some of these cookies may affect your browsing experience.
Necessary Always Enabled
Necessary cookies are absolutely essential for the website to function properly. This category only includes cookies that ensures basic functionalities and security features of the website. These cookies do not store any personal information.
Non necessary
Any cookies that may not be particularly necessary for the website to function and is used specifically to collect user personal data via analytics, ads, other embedded contents are termed as non-necessary cookies. It is mandatory to procure user consent prior to running these cookies on your website.
Analytics
Analytical cookies are used to understand how visitors interact with the website. These cookies help provide information on metrics the number of visitors, bounce rate, traffic source, etc.
Save & Accept